Following on the heels of AMD’s CPU-centric event back in August, AMD today has sent out a press release announcing that they will be holding a similar event in November for their Radeon consumer graphics business. Dubbed “together we advance_gaming”, the presentation is slated to be all about AMD Radeon, with a focus on the upcoming RDNA 3 graphics architecture and all the performance and power efficiency benefits it will bring. The event is set to kick off on November 3rd at 1pm PT (20:00 UTC), with undisclosed AMD executives presenting details.

Like the Ryzen event in August, next month’s Radeon event appears to be AMD gearing up for the launch of its next generation of consumer products – this time on the GPU side of matters. Back at the start of the summer, AMD confirmed that RDNA 3 architecture products were scheduled to arrive this year, so we have been eagerly awaiting the arrival of AMD’s next generation of video cards. 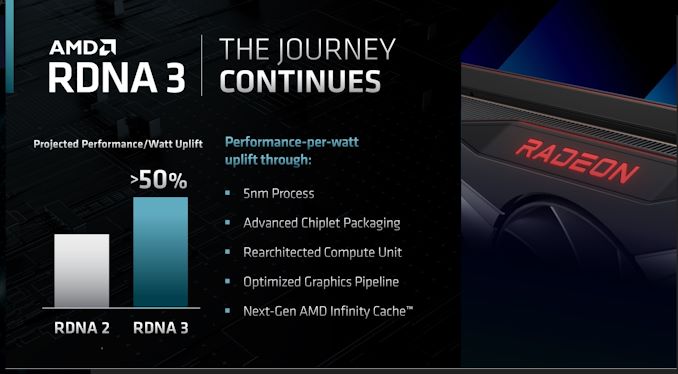 Though unlike AMD’s CPU efforts, the company has been far more mum about its next-gen GPU efforts. So details in advance on what will presumably be the Radeon RX 7000 series have been limited. The biggest items disclosed thus far are that AMD is targeting another 50% increase in performance-per-watt, and that these new GPUs (Navi 3x) will be made on a 5nm process (undoubtedly TSMC’s). Past that, AMD hasn’t given any guidance on what to expect for performance.

One interesting aspect, however, is that AMD has confirmed that they will be employing chiplets with this generation of products. To what extent, and whether that’s on all parts or just some, remains to be seen. But chiplets are in some respects the holy grail of GPU construction, because they give GPU designers options for scaling up GPUs past today’s die size (reticle) and yield limits. That said, it’s also a holy grail because the immense amount of data that must be passed between different parts of a GPU (on the order of terabytes per second) is very hard to do – and very necessary to do if you want a multi-chip GPU to be able to present itself as a single device.

We’re also apparently in store for some more significant upgrades to AMD’s overall GPU architecture. Though what exactly a “rearchitected compute unit” and “optimized graphics pipeline” fully entail remains to be seen.

Thankfully we should have our answer here in two weeks. The presentation is slated to air on November 3rd at 1pm Pacific, on AMD’s YouTube channel. And of course, be sure to check out AnandTech for a full rundown and analysis of AMD’s announcements.